The SFA Trombone Studio students were extremely busy this fall semester. The marching band did three full shows. The jazz bands had a guest trombone artist from the Marines, Gunnery Sergeant, Ken Ebo. We hosted Houston Grand Opera trombonist, Thomas Hulten, for a studio masterclass. The concert bands performed a major concert and also hosted famous composer, James Syler. The trombone choir held a concert and went to an elementary school to perform. The choir used trombones in their final Masterworks concert. The orchestra performed West Side Story and Romeo and Juliet. Several students recorded for competitions. The SFA Trombone Octet was featured at a major concert.  The freshmen had a weekly techniques class. A big thank you to Kyle Manuel and Chris Cannon for all your contributions to the studio over the years! Congratulations on your graduation! And, now, over the break, students are planning to attend the Big 12 Trombone Conference. 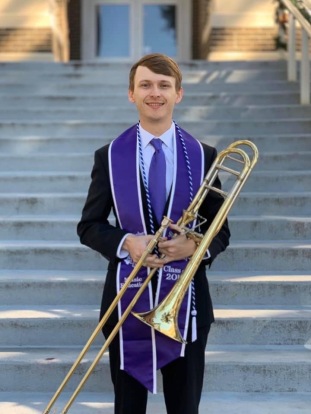 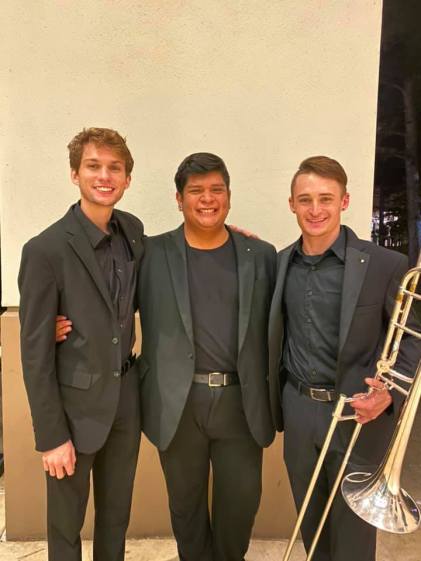 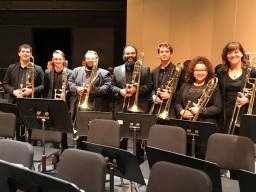 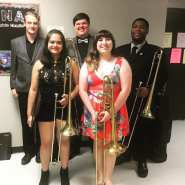 Kahlil Wyatt recently won an audition for a position and scholarship to perform in the Sewanee Summer Music Festival in Tennessee!

The SFA Wind Ensemble Trombones returned late Tuesday evening, Feb. 5 from playing six concerts in two days. They sounded fabulous and had a great time! The Faculty Brass Quintet from SFA was able to perform a few pieces as well.

Our tour to Houston this year was such a success. Performing at several high schools and then a nice meal at Cheesecake Factory to top it off.

Lots of food, the white elephant gift exchange, and now a new tradition of burning a door made this party awesome. 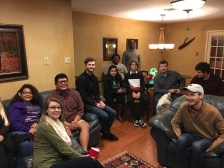 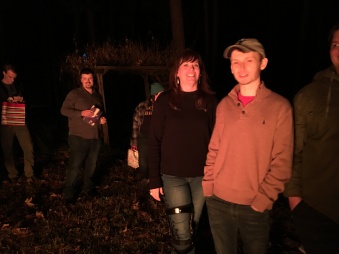 Congrats to this section on a great performance of Wagner and Gregson. END_OF_DOCUMENT_TOKEN_TO_BE_REPLACED

Proud of these students who performed as part of the “best brass section SFA has ever taken to TMEA”. The concert was truly phenomenal, so much so, that one of the players fainted onto the floor and couldn’t get up.

The concert will feature a combination of trombone quartets and trombone choir, according to Dr. Deb Scott, professor of trombone in the SFA School of Music and the choir’s director.

The trombone choir will perform an eclectic program of mostly classical music, including Fanfare for 8 Trombones by Shelley Gurin, composer from “Praise the Lord” by Handel and Hopson, arranged by Jon Bohls and Canzona for Eight Trombones by Walter S. Hartley.

The group will conclude its performance with an exciting Brazilian piece called “Trombocueca,” which is a new piece of music by N. Ernesto Cortes composed for the “Trombonanza” conference in Argentina last summer where Scott was a featured artist.

Marking its 15th year, International Trombone Week is an annual worldwide celebration of the trombone. Since its beginning in 2003, the observance has featured thousands of trombonists creating and participating in grassroots events and performances all over the world.

Trombones at SFA
Blog at WordPress.com.